This is an abbreviated description and listing of some of the whale species that can be seen around San Diego. By far the most common is the California Gray Whale, which can be seen during their annual migration down the west coast from Alaska to Baja, Mexico and back again, providing many unique viewing opportunities. The warm welcoming waters of the San Diego coastline are also home to several other types of whales and dolphins. Much of the following is referenced from the American Cetacean Society.

MOST POPULAR WHALE SIGHTINGS ON OUR CHARTERS 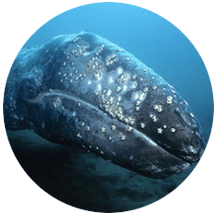 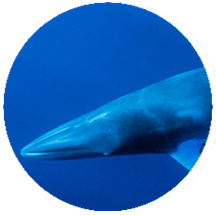 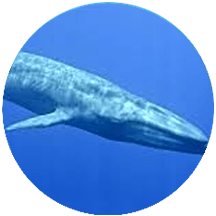 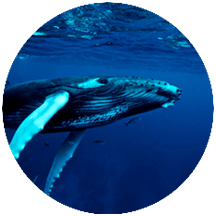 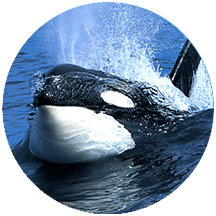 Humpback Whales inhabit all major oceans and can migrate up to 16,000 miles each year!

THE LARGEST ANIMAL EVER

Blue whales are the largest animals known to have ever lived.

BLUE WHALES HAVE A BIG APPETITE 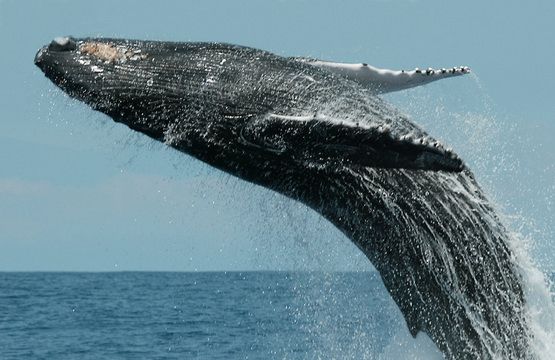 The California Gray Whale can reach a length of 52 ft., weigh up to 36 tons and live to the average age of 60 years.

Gray whales reach sexual maturity shortly after 5 years of age. The females gestation period is around 12 months and after giving birth calves are nursed for 7 – 8 months on its mother’s milk, similar to a human baby. The whale milk, however, is 53% fat content (human milk is 2% fat by comparison). One calf is born per mother every couple years.

OVER 10,000 GREY WHALES MIGRATE PAST SAN DIEGO EVERY YEAR

The California Gray Whale is one type of baleen whale , signaling the type of food it consumes. The baleen plates act as a filter, helping the whale to eat 4,500 – 5,000 lbs. of microscopic krill and phytoplankton from large quantities of ocean water. The California Gray Whale has no dorsal fin (located on the back or spine), but does have a dorsal hump followed by a series of 6 – 12 knuckles along the dorsal ridge that extend to the flukes. These features can easily be seen whale watching if the curious giants make an approach to inspect the boat.

Breathing patterns are generally characterized by blowing 3 – 5 times in 15-30 second intervals before raising its fluke (tail fin) and submerging for 3 – 5 minutes, but a gray whale can stay submerged for up to 15 minutes, so practice patience when scanning the horizon. 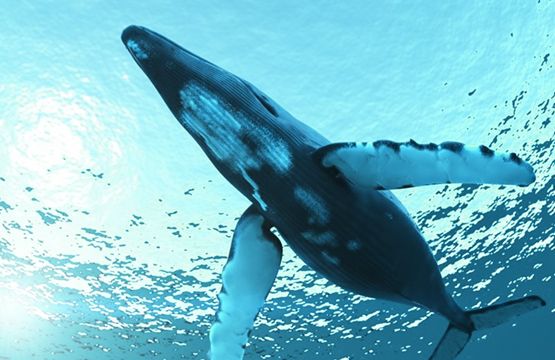 Despite the enormous size they are very fast swimmers and can swim at 30 knots if they need to or choose to do so.

It is a beautiful paradox that the largest animal on the planet eats almost exclusively one of the smallest creatures on the planet, shrimp-like creatures called krill.  The Blue Whale has baleen plates which it uses in filter feeding to extract the krill from the ocean water, devouring about 4 tons every single day!

Today there are about 15,000 blue whales which is considerably less than 5% of their pre-whaling population. Traveling in small pods, alone or as a pair, they can be found in oceans across the globe.

Blue Whales reach sexual maturity at a similar age to the gray whales and have a slightly shorter gestation period. During nursing (a period of about 7 months) the calf consumes 100 gallons of milk a day and gains about 200 lbs per day in weight. Blue Whales are also the loudest species on the planet and scientists estimate they can communicate up to 1,000 miles away. 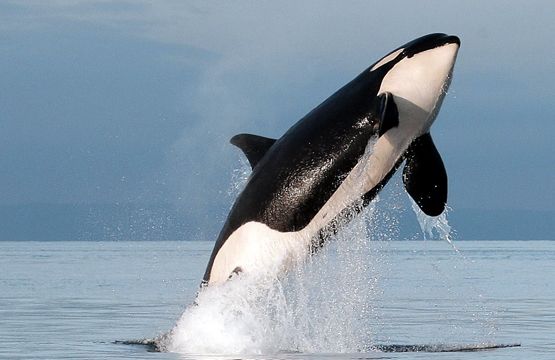 WEIGHT: Up to 6 tons

Most people are more familiar with the Orca being called a ‘Killer Whale’ because of Sea Worlds’ world famous ‘Shamu.’ The Orca is on average about 30 feet in length and has a very tall and prominent dorsal fin which is several feet tall, triangular in shape and most often completely upright. In captivity this dorsal fin folds over, as in the case of ‘Shamu.’ They reach maturity much later than other whale species, not until 10 to 18 years of age.

Orcas do not have baleen but have conical teeth (similar to a dog) and are opportunistic eaters, dining on a variety of animals such as fish, porpoises and seals.

Not commonly known but Orcas do migrate. Not on fixed routes, however, but instead follow food supplies. They have no natural enemies in the food chain, except humans and populations of Orcas are experiencing health issues caused by chemicals ingested by the animals which they consume. The Orca normally prefers colder nutrient rich water, such as in Alaska, but they can be found in oceans worldwide.

While it is considered rare, we do see Orca whales off of San Diego shores and there have been several sightings of a pod off the nearby island of Catalina.

We encourage you NOT to support organizations that use captive animals for entertainment. 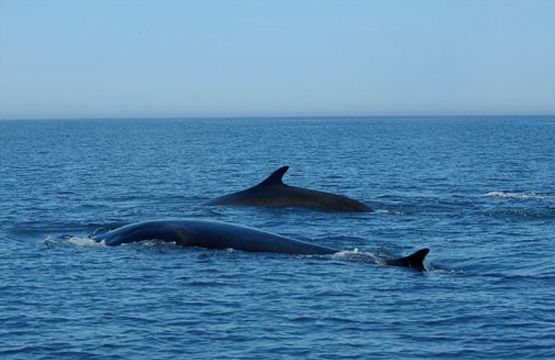 Long and sleek and like the Gray Whale, the Finback has a small protruding dorsal fin, are considered one of the shyest and most hunted of the whale species and are the fastest swimmers of whales, capable of reaching 35 mph in short bursts.

The Finback Whale is also a baleen whale, and they have a series of grooves (500-100) that run from the chin to the navel, which allow for expansion when the whale sucks in tons of water.

The Finback Whale is considered nomadic and can be found in all oceans of the world, they also migrate annually for food. Endangered due to the heavy impact of whaling on the Finback, the species is still trying to recover. 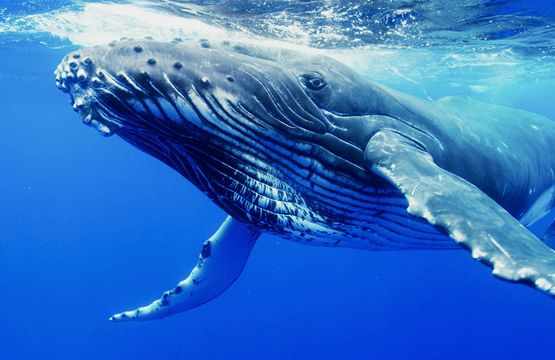 Humpbacks Whales are more rotund than, and not as aerodynamic, as some of the other whales described. The upper part of their body is blackish in color with the underside being white or mottled, this contrasting design is common in the ocean creating camouflage from below and above.

Humpback Whales are most commonly recognized for their prominent traits. It is commonly known that they are very acrobatic and exhibit such behaviors like breaching or swimming on their back, and spy hopping. For these common behaviors make the Humpback one of the more playful of the whale species. Besides their iconic long arms or flippers, their music or song is renowned worldwide. The male Humpback Whale’s song lasts for approximately 15 minutes and may be repeated for hours at a time. This behavior is still a source of curiosity for scientists and marine mammal enthusiasts alike.

The Humpback Whales also feed on krill or small fish and filter it using baleen plates – eating up to 1.5 tons of krill each year. These whales are found in all the world’s oceans. Their population numbers around 35,000 and is a meager 1/3 of their original population.

Watch an interesting video from Whale Trust regarding Humpback Whales.