San Diego has a variety of coastal and safe haven watershed climates to offer for a variety of types of birds. In addition to the native birds that can be found year round, there are literally hundreds of species of migratory birds that stop in San Diego annually. The climate and location make for the perfect rest stop, not just for vacationing humans, but a variety of birds on their way to and from warmer climates that just can’t help but stop over and stay a bit.

MOST POPULAR SIGHTINGS ON OUR CHARTERS 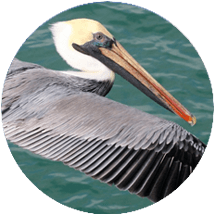 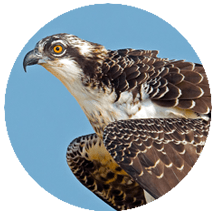 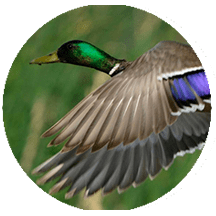 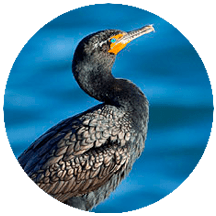 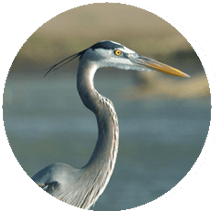 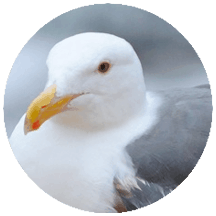 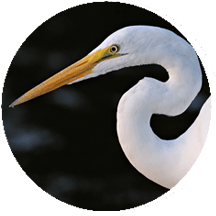 CARE FOR SOME WATER?

A truly unique and rare ability, seagulls are able to drink both fresh water and salt water.

Cormorants can dive up to 45 feet.

PELICANS HAVE A WIDE WINGSPAN

A brown pelican can have a wingspan up to 8.2 feet. 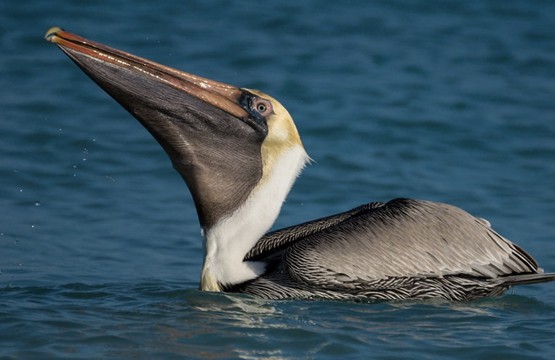 The Brown Pelican is often seen flying in smaller groups in ‘V’ formation along the surf line up and down the coastline in San Diego, daringly close to the crashing waves. The brown pelicans weave in and out of the waves effortlessly like graceful pterodactyls. Brown pelicans are prominently recognizable for their long beaks and gull sack or pouch underneath the beak.

The expandable pouch filters water out from giant the gulps that the pelicans take when hunting prey, leaving behind just the tasty fish. The large pelicans dart into the water at full speed, slapping the water and stunning the fish, where it then swallows all and then water is filtered out of the throat pouch or sac.

Formerly a threatened species, they now have fully recovered and thrive along the Pacific Ocean and lagoons. 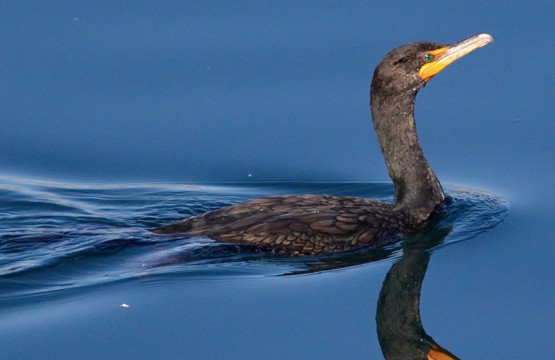 San Diego is home to three different species of cormorants (originating from the Latin corvus marinus or “sea raven” or “bald raven”), specifically the Brandt’s, Pelagic and Double-Crested Cormorant, most commonly seen is the Brandt’s Cormorant. La Jolla and Point Loma are home to the only colonies of Brandt’s Cormorants south of Santa Barbara. Populations of the cormorants are highest in winter peaking at late as February in nesting season. Considered a solely maritime bird, cormorants dive in shallow waters to feed, can hold their breath for extended periods and are adept at fishing for both small and larger fish. Considered medium in size they are primarily black all over. Scientists believe the cormorant species dates back to prehistoric times possibly living during the age of dinosaurs. The cormorant was also the chosen species to be featured as the hood ornament of the Packard automobile. 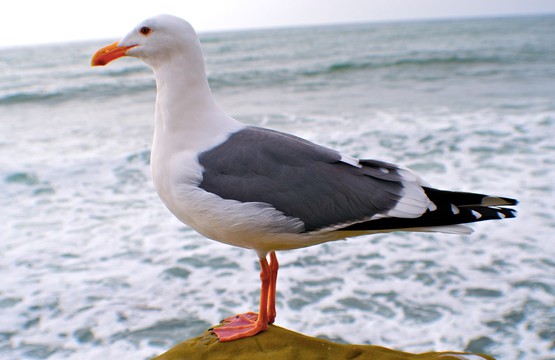 By far the most recognizable shorebird, sea gulls are outgoing opportunistic feeders that particularly love summertime and beach-goers packing picnics and treats at the beach. Congregating in large, often noisy groups they are considered medium sized. Sea gulls are able to eat just about anything and try to, sometimes to their detriment. They are also able to drink both fresh and salt water adding to their ability to consume just about anything. The term “seagull” is actually slang, or a layman’s term for a larger class of birds in the Gull genus Larus. Gulls are monogamous, usually mating for life, and can live into their 40’s.  Overall sea gulls are considered highly adaptable, intelligent and require a complex social structure that is still being studied by biologists today.  The specific types of gulls that inhabit San Diego include the California Gull, Western Gull, Ring-billed Gull, and the Heermann’s Gull. 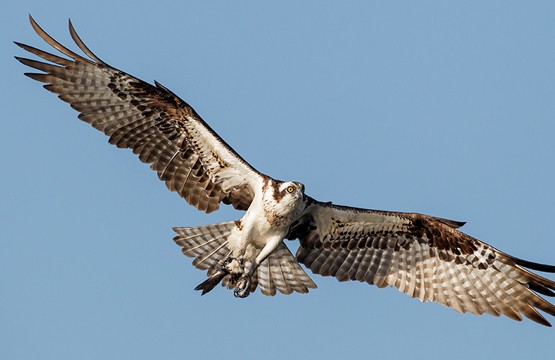 The predatory raptor is also commonly called the ‘sea hawk’. Their markings feature a black eye patch with brown and grey body coloring. Osprey and owls are the only species of raptors with reversible outer toes (or talons). This ability allows them to grab their prey with two toes in front and two behind, securing the mid flight snag of prey. Their diet consists of 99% fish, and they have even been known to assist fisherman to help humans catch fish. The osprey has been referred to as far back as Greek Mythology, and is the provincial bird of Nova Scotia. Most people don’t know that the Seattle Seahawks are actually the Seattle Osprey. 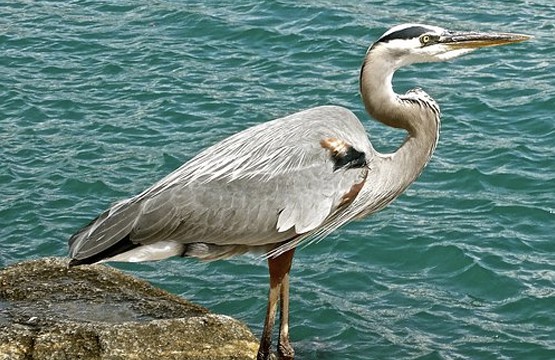 The heron family of birds are long legged, long necked wading birds most commonly found in marshes, wetlands, estuaries and shallow coastal waters. Primarily two species of herons, both  the Great Blue Heron and Night Heron, make San Diego their home and can be seen year round. Herons are considered shy and usually found in small families called colonies, or “henories” when nesting their primary predators are humans and predatory birds, such as Hawks and Eagles.

The Great Blue Heron is the largest species of heron (Ardeidae) in North America, standing over 4 ft. tall, yet they weigh just around 5 – 6 lbs. Their necks form a distinct ‘S’ shape designed not only for aerodynamics allowing them to take stealth and silent flight, but the unique position allows them to strike prey as fast as you can blink. Feeding primarily on small fish, crab and shrimp, they generally stay in shallow waters or close to the shore. The Night Heron is a medium sized heron and can also be seen, but as the name suggests feeds primarily at night and are a less common sight. 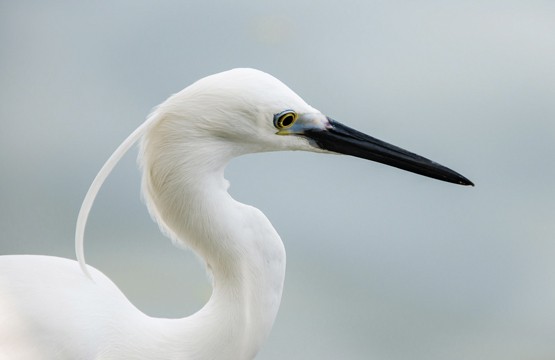 The difference in classification between the heron and egret is still debated, but it is generally accepted that the egret is a sub-species of the heron family. Local to San Diego, the majestic, and angelic snowy white egret is always a breathtaking sight. Their plumage is virginal white, as the name indicates and similar to the heron, they have twig like long legs, elongated beaks, and are stealth flyers. Besides the physical resemblance they also hunt their prey in the same manner as the heron. Their wingspan is usually about 3 feet and they often have tufts of additional white plumage on their chests or back of the head. 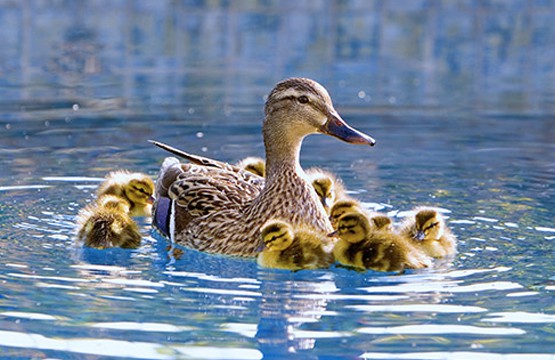 Several types of ducks and grebes inhabit the lagoons, inlets and estuaries around San Diego’s coastline. Ducks and grebes are both diving birds and are similar in size. Some of the most common species include:

Along the beaches it is common to see sandpipers and plovers darting at the water’s edge and digging for sand crabs.