Dolphins are very social animals and often enjoy playing in the yacht bow wake. It is always a lot of fun when they are around and of course their appearance makes for great photos! We do often encounter dolphins on sightseeing charters. If this is something you are interested in please let the charter booking person know.

The are currently 40 dolphin species that are in existence. Their streamlined bodies are idea for ocean life. They have exceptional hearing both for in and out of the water. Their echo location abilities are exceptional and they can survive even if they are blind. As a rule they do prefer warmer waters but there are exceptions. Females mate only one each two or three years.

Unfortunately dolphins face many dangers!. In Japan, they are hunted still even in the face of international condemnation in dolphin driving hunts. The also face dangers as by-catch, pollution and loss of habitat. Dolphins are still used by the military and some theme parks as entertainment. We encourage you to be aware of these practices and speak out again them.

MOST POPULAR SIGHTINGS ON OUR CHARTERS 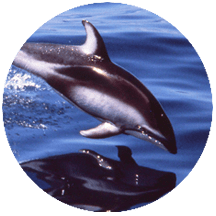 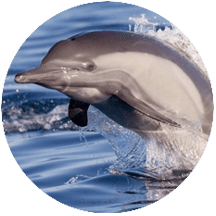 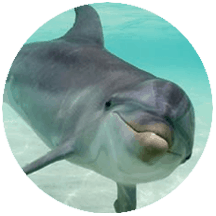 These dolphins keep close company. White-sided dolphins swim in groups of 10 to 100, and can often be seen bow-riding and doing somersaults. Members form a close-knit group and will often care for a sick or injured dolphin.

The white-sided is a fast swimmer (over 60 km/h!), and breaching behavior and aerial acrobatics are common with this species.

They are very entertaining to watch.

Dolphins aren’t involuntary breathers. They consciously swim to the surface to take a breath, they never fully sleep. One side of their brain is always active. During this period they show signs of insulin resistance related to type 2 diabetes. When they awake this disappears.

The dolphin gestation is in the range of 7 -17 months. Usually one calf is born (twins are rare) and the mother immediately takes the calf to the surface for it’s first breath. The calf will nurse from 11 month to 2 years and stay with the mother until it is between 3 and 8 years old.

The Pacific White-Sided Dolphin easily recognizable for its contrasting white stripes along the sides of their grey-black bodies.

The Bottlenose Dolphin is by far the most recognizable dolphin on the planet, made easily recognizable by the television show “Flipper.” Friendly and incredibly intelligent the television show did not fictionalize this aspect of their behavior. Bottlenose Dolphins are amicable, eager to please and historically have saved humans from drowning and protected from sharks and other open ocean predators. Some historians believe that ancient stories depicting mermaids were actually dolphins, in most cases the Bottle Nosed Dolphin.

Easy to recognize for their permanent smile and all grey bodies, they are the larger than the Pacific White-Sided Dolphin and can be found in coastal waters across the globe, but prefer warm temperate climates. Back in the 1960s the US Navy developed the Navy Marine Mammal Program in which the dolphins complete complex and sometimes dangerous tasks such as detecting underwater mines, conducting surveillance, delivering needed items and guarding equipment. This program is still underway today in San Diego and it is common to see our enlisted Bottle Nose Dolphins on patrol along the coast and taking time while traveling to enjoy the surf with the locals. It is very common to spot the dolphin boats out on the bay – ask your captain to point them out while on your charter.